This keto pumpkin pie recipe is the perfect addition to your low carb Thanksgiving or holiday feast.

There is one thing about the holidays that is sort of a universal language. Food. It’s pretty much the center of any gathering around the holidays, and we all seem to eat too much. Especially of the stuff that isn’t on our diet. Stuff that contains pumpkin!

I have a can of pumpkin puree here (not pumpkin pie filling) and it claims to have 10 grams of carbs and 4 grams of fiber per half a cup. This equals 6 grams of net carbs. Depending on your daily carbs, you might not consider pumpkin low carb. But the carbs in pumpkin are not the same as the carbs in say bread or other grains, and the glycemic load is more moderate. Provided you aren’t adding sugar or other sweeteners. Pumpkin also contains a ton of great nutrition like vitamin A, potassium and others. You will want to consult the nutritional information on the package if you are buying canned pumpkin.

Can you eat pumpkin on keto?

How do you make a low carb pumpkin pie?

A keto low carb pumpkin pie will be sugar free and gluten free, will use whipped cream made from heavy cream without sweetener and will utilize coconut flour or almond flour for the crust. Your sugar free pumpkin pie will have to contain some natural sugar alternative like stevia, however, because you do want it to have some sweetness to it.

For a more keto friendly low carb pumpkin pie you may want to consider eliminating the crust altogether. It’s still delicious and lowers the carb and the calories. You can think a bit outside the box when making low carb pies, but still get a satisfying alternative to a traditional favorite.

This keto pumpkin pie recipe uses cream cheese to help cut down on the carb content. I also have a grain-free no bake pie crust recipe that would work well for holiday gatherings too. Make both!

Combine all that with this keto pumpkin pie and you have a delicious Thanksgiving meal that doesn’t blow your healthy lifestyle. Sounds like a win to me!

There are two sets of ingredients for this pie, one set for the crust, and another for the filling.

The keto pumpkin pie crust has to be made into a dough and then chilled for at least an hour.

Once chilled, press the crust into a pie pan, poke with holes, and partially bake per instructions in the recipe card.

Mix the ingredients for the keto pumpkin pie filling together and pour into the already partially baked crust. Then bake fully.

You want the center to be firm and the top of the pie to be slightly browned. This one may have gotten slightly overcooked. Still delicious, but maybe didn’t need to stay in as long.

As I mentioned above, you can make a keto pumpkin pie without a crust. You may want to cut back a little on the heavy cream in the recipe to make sure it is firm enough to cut and serve without the crust. And grease the pie pan with butter before pouring the keto pumpkin pie filling into it before baking.

I really like a crustless pie, it’s almost like breakfast instead of dessert this way. I’d love to know if you try it without the crust, definitely report back!

How amazing would this keto pumpkin pie look in a cast iron pie pan? 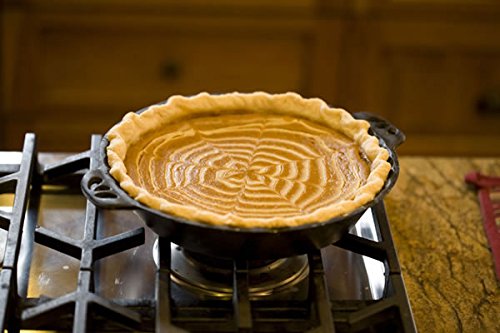 That would look so pretty on the table after Thanksgiving dinner!

I prefer to cut back on the Erythritol. because I don't like thing overly sweet. I would cut it in half next time, but that's a personal preference. I have calculated this recipe at 5 grams of net carbs. Please very the nutrition information yourself based upon the ingredients you use, especially if you are carefully tracking to stay in ketosis.

Creating easy recipes with everyday ingredients since 2008. I believe you can make quality homemade recipes even if you are short on time and budget-conscious. You just need to dive in and learn as you go!

730 Sage Street is a participant in the Amazon Services LLC Associates Program, an affiliate advertising program designed to provide a means for us to earn fees by linking to Amazon.com and affiliated sites.

Privacy
Send this to a friend
We use cookies to ensure that we give you the best experience on our website. If you continue to use this site you accept these conditions.YesRead our terms